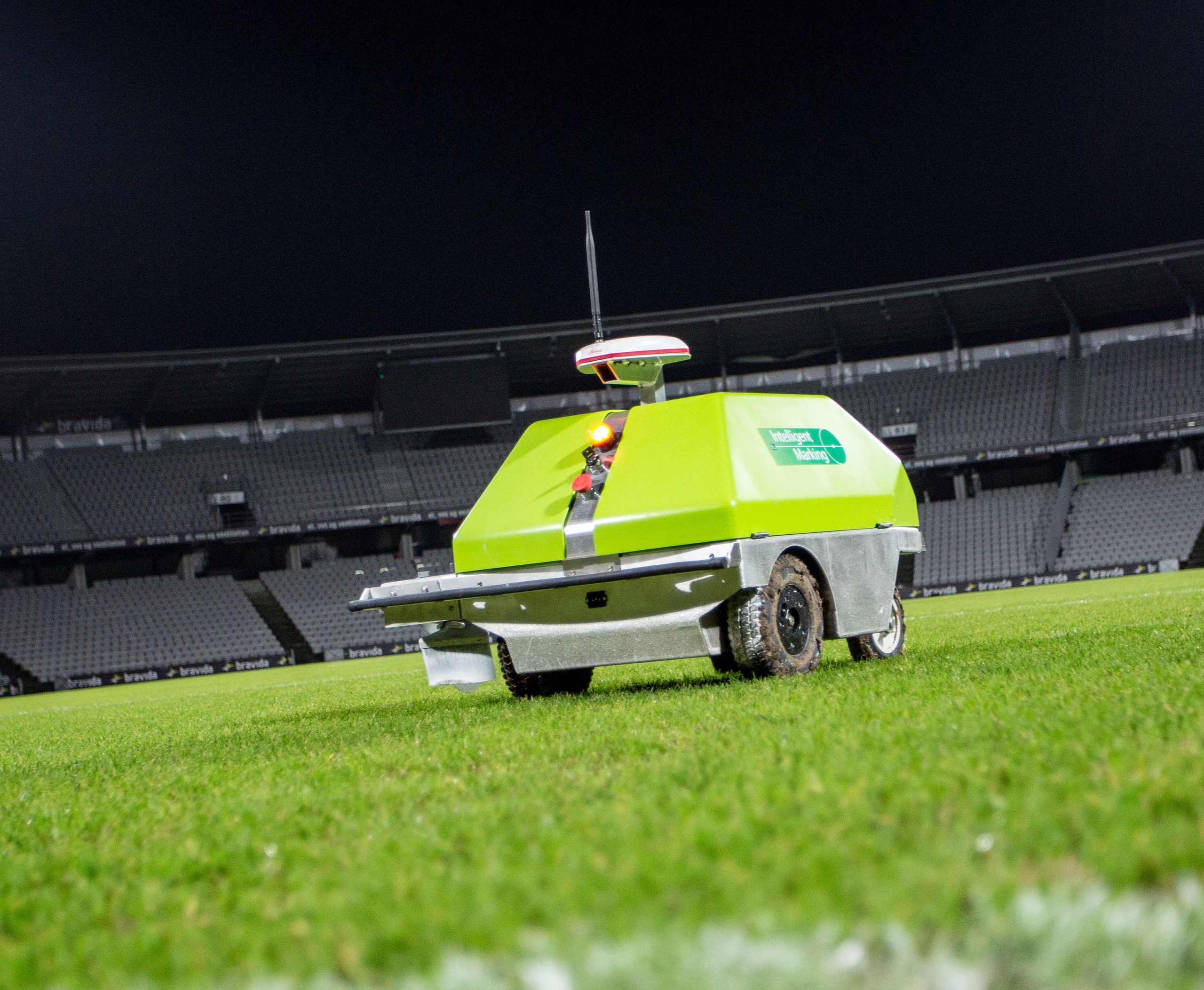 After 4+ years, in mid-2020, the project and idea is flying though the two founders Anders Ulrik Sørensen and Andreas Ydesen signed out of their company – formerly known as Intelligent Marking – in late 2019. The future still looks exciting for the innovative product. Despite the name has changed into the more sophisticated Tank Turf One, primarily in light of the international potential, the product is still more than alive. The robot, which at first glance resembles an overgrown robotic lawnmower is trying to make it's breakthrough in the US.

Turf Tank One, also backed by the danish Innovation Fund over time, can save clubs for hundreds of hours and not least deliver a GPS and satellite-accurate result for the fields line marking work.

However, there have been some bumps in the road through the introduction of the robot to the US market. GPS challenges were a significant part of the problem because the coverage was not fully comprehensive to the extent we know about i.e. in Denmark - although there may also be challenges here in certain peripheral areas. However, the problem that has been solved by developing a more local solution for each machine which secures the precision in the line marking regardless of the mobile signals.

But back to the functionality of this exciting robot assistant who must please any field manager. Turf Tank One has precision in marking down to +/- 1 centimeter and also saves on the materials if you look at the environmental aspect. According to Turf Tank's own website, the machine is so efficient that it can save up to 50% of the amount of materials that line marking of one football field would consume. Which by the way take less than 30 minutes to finish.

There has also been a bit of a 'strategy dance' when it comes to find the right business model. Here in 2020, however, the smart invention in subscription format has ended up being offered at 450 Euros a month. You can also choose to acquire the robot for 27 000 Euros. In addition, it is assumed that there will be extra costs for GPS subscription etc., which applies to all the robots.

Parallel with the exit of the founders end 2019, a branch has also been set up to take care of the investment in the United States. Around 30 people are employed in Intelligent Marking, where the main investors including Jacob Riisgaard – probably best known from the danish version of "Shark Tank" have kicked the ball up for new adventures.

However, Turf Tank is not the only product on the market. Also mastodonts like carmaker (and Champions League sponsor) Nissan, have checked into the competition with their own robot, Pitch-R. It saw the light of day in 2018 through the automaker's own 'Nissan Football Lab'. Turf Tank One may just see it as a recognition that they have a product with enormous potential. We do not know whether Nissan intends to release their robot in the commercial market or if it just was a stunt before the Champions League final in the ukranian captial Kiev. Footballogy.net have tried to get answers through Nissan's European support department, but without getting answers to fullfil our questions but a fact is that the robot is not found to be sold anywhere online by footballogy.net. Read more about Nissan's line marking robot here: https://www.unit9.com/project/nissan-pitch-r-robot

In our research for this article, we also came across another robot named TinyLineMarker Pro , the price of which is in the region of 26,500 euros. This technology is also based on clever Danish people's constructions, so Danish entrepreneurs have thus emerged unique in the world despite their only 5.8 million cityzens. Well done. You can contact the company TinyMobileRobots directly through their website. The machine is more similar to one of the typical line marking units known from 'old days', but is equipped with all kinds of technology, which is in many ways similar to the previous two models described here in the article. It is possible to name 50 different sports in the latest 2020 model, where football is one of the sports.

TinyLineMarker Pro can run for 4 hours on a charge. It's controlled by GPS, i.e. through satellites, but also 4G and Bluetooth are mentioned under the specifications. The robot is waterproof and it's controlled through an accompanying tablet, where also an dedicated app is installed. Watch a case study from the company's website, where a feature has been made with two employees in Vejle Municipality , who have invested in one of Tiny Mobile Robots line markers.

Watch a video below with the robot how it line marks a soccer field in 20 minutes.

Revealed: The official match ball that will decide the EURO2020 final

Official app: Get in-depth stats for all teams live during EURO2020