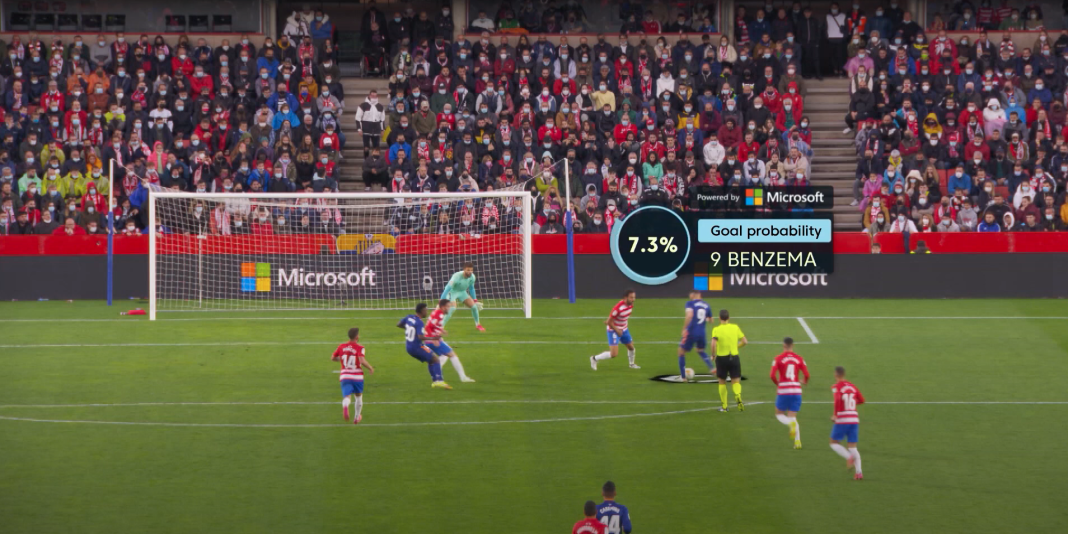 We know it's geeky, but that's what we do here… Spanish LaLiga is once again at the forefront of the development of what can be done when it comes to making statistics and data available to the individual football fan.

In collaboration with Microsoft and their Azure technology - a collaboration that has roots back to May 2021 - the Spanish top league this weekend premiered the result of an ongoing project that during 2022 will roll out another 21 news based on data from analyzes of 2000 already played matches as well as - of course - the currently playing match. And this, so close we p.t. can come in real-time.

Footballogy.net gives you the full overview and the background

Footballogy.net tries here to provide an overview of the many numbers and news that a recently published article on soccerex.com contains. Even we had to keep our tongues straight in our mouths, but that's almost how it must be when superfans meet the number crunchers from the big IT companies. Big data it's called.

The live aspect makes the difference

The German Bundesliga has already in 2020 introduced a similar technology in collaboration with AWS (Amazon Web Services, ed.), But with a quick look at the already implemented technology in the best German series, LaLiga's latest service for football fans seems like a superstructure - not at least because of the complexity and speed of delivering the magic number to the live transmission. We will get to that immediately.

Watch video about the German counterpart, below.

Millions of data points in one number

The very short story and the result of the above is that the live or streamed football match already in connection with the slow reproduction - or Instant Replay, as it is called in modern, everyday speech - will be able to show a graphic with several data points. This boils down to a single number in the form of the word you should hereby notice well: Goal Probability.

As many as 3.5 million data points go through the potent computers during each match, creating as many as 2,000 measurable units per player. 16 tracking cameras located in strategic locations, around the stadium, record the players' movements and actions.

This is how it works

When the goal is then scored - or the golden opportunity is burned and gives any football fan gray hair in the head - the computers using Microsoft's Azure technology crush all these numbers in 30 seconds. This is then ready for publication in conjunction with Instant Replay number two. In other words, every single celebration of a goal and the subsequent jubilation scenes will be the best friend of the new technology. This means that the many data points can be generated. That is, the golden number that should give the exact percentage in order to Goal Probability for the scoring player.

Rebeca Marciel, Enterprise Commercial Manager at Microsoft Spain elaborates: - Microsoft's Machine Learning & Artificial Intelligence technology has facilitated this development thanks to the analysis of historical tracking data from more than 20,000 shots obtained from around 2,000 matches. The capabilities of this technology have enabled LaLiga to take another step forward, and have become the first league to bring a data point with these features into live broadcasts of football matches.

Example. A score on a given chance, which gives the figure 2%, will in this case mean that a goal will only be the result once out of 50 attempts. Based on more and more data, the more matches that are included in the statistics, the more accurate the numbers. In other words. All a result of artificial intelligence (Artificial intelligence, ed.).

In the test run leading up to this weekend's premiere, for example, it turned out that a shot that gave a Goal Probability state of 14.3% would increase to 23.1% with the so-called player effect , if a player like Karim Benzema, was responsible for the actual execution of the shot. That's a wildly exciting piece of information for any football fan with statistics geekiness in their blood, right?

In other words, Big Data has to that extent reached the world of football with graphics served almost instantly - or at least in connection with Instant Replay. And with this number, it is also an opportunity to read each player's daily form in relation to what he / she would be able to deliver on the turf under optimal conditions.

Also watch video below on the development of the various factors on when to expect a goal scoring. Football made Simple gives you a good overview here, as a precursor to the above technology.

Denmark in the EURO2020 final - no matter what!