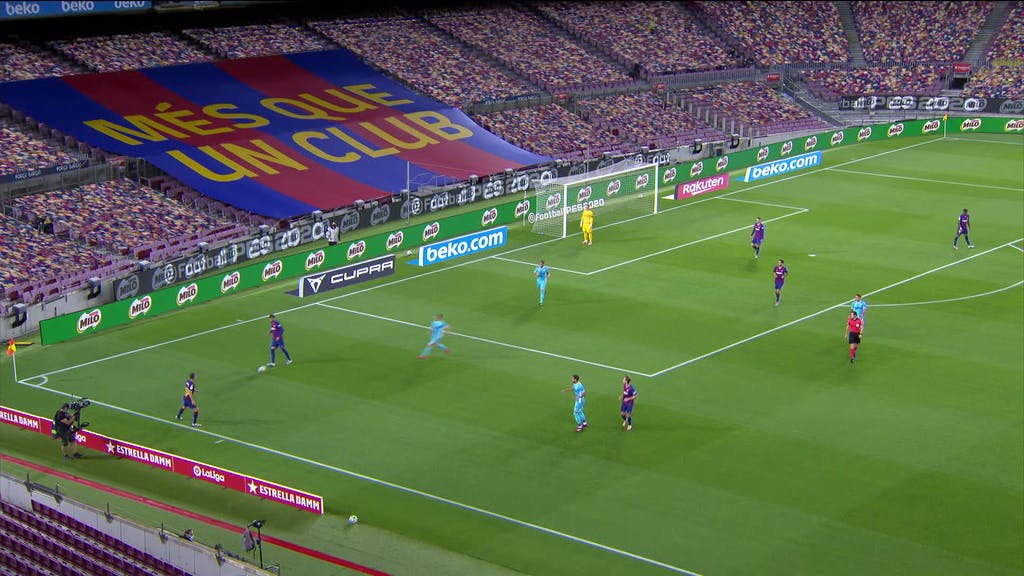 Corona has made new virtual partnerships flourish and brought an unprecedented creativity to unfold in the stadiums around the world. Among producers of football broadcasts for TV and streaming, new ways have been found to fill the empty, European stadiums.

In Denmark the Superliga club, AGF, was one of the first in the world to play the games with virtual spectators on giant screens and since then, the solutions have only become more numerous around Europe. Footballogy.net has taken a short, virtual tour of a couple of our European leagues, where both game producers and graphic 3D companies have been involved in the various projects. Footballogy.net er taget på en kort, virtuel rundtur til et par af vores europæiske ligaer, hvor både spilproducenter og grafiske 3D-virksomheder har været involveret i de forskellige projekter.

In the Italian top league Serie A, empty stadiums have been filled with club emblems, advertisements and other graphic features. For example, lately, one has been able to experience that even the center circle, has been filled with logos and advertisements before each match. The graphics company, Interregional Sports Group, has collaborated with the Italian production company, Netco Sports Italy.

– Our prime objectives are maximising ROI (return-on-investments. ed.) for brands and delivering optimum revenue impact for rights-holders, while never compromising the enjoyment of the live event for the viewing audience, says Simon Burgess, Joint Chief Executive and co-founder of Interregional Sports Group.

Immediately one would think that the producers has to compromise a lot with the quality of the production, but ISG assures you that this doesn't happen: - We never compromise with the production and thus the joy of the live experience for the audience, tells Simon Burgess, who can state that so far there are no plans to project spectators onto the empty stands. However, this step has already been taken with the neighbors from the Spanish top league La Liga through the graphics company, Virtz', technolgy.

– We talk to all the camera operators, to try - whenever possible - to avoid the empty seats.

La Liga was in fact 'first-in-class'’ when it came to ‘filling’ the stands with virtual audiences. Through the graphics company Virtz, the video game developer EA Sports, which delivers realistic unique stadium sound as well as the production company and rights holder Mediapro, La Liga has initiated some noise in the stands. With Virtz' graphic technology, virtual fans have been created in the colors of the home team, among other things. However, it also meant that TV production had to move their ‘camera 1’ position, to create a maximum effect of the virtual ‘overlay’. However, a few ‘shots’ could not avoid the empty seats.

New challenges for the production team

During a virtual press conference on technology, Óscar Lago, Mediapro's Match Director, said that there was direct communication about the challenge with the camera operators: - We minimize the number of camera shots with empty seats. There are some shots that are impossible to change, like the 18-meter camera for offside repetition, but we talk to all the camera operators, to try - whenever possible - to avoid the empty seats.

- No one in the TV industry ever imagined that one day we should use these skills. It's a scenario that was unthinkable for all of us and for me it has been the biggest challenge in my 30-year career in television, says Óscar Lago, who in 2010 and 2019 was in charge of the production of the Champions League finals in Madrid.

However, no renewals are without criticism. TV viewers have reacted to the virtual viewers and complained that these do not look particularly realistic. However, it has never been an end goal for the initiators of this development, within TV production of football matches Óscar Lago continues.

- Our goal was not to make a super realistic picture of fans as during a normal match, but something that makes TV viewers forget that the spectator seats are empty. We therefore started to analyze what type of audience we usually see from camera 1. The viewers usually do not look at the stands during the match, as they are focused on the match itself, Lago tells the media Sportsbusiness.

IF IT IS OPEN THROUGHOUT THE WAY THAT SMALLER GROUPS ARE AGAIN ALLOWED IN THE SPECTATORS, THERE WILL STILL BE CONSIDERING USING THIS NEW FORM FOR VIRTUAL OVERLAY TECHNIQUE

As mentioned earlier in this article, EA Sports delivers the unique sound to the stadium. It's implemented in such a way that - depending on the situation that arises - sound technicians are located in the stadium area itself, who then act as a kind of DJ

Should spectators be let in along the way then we still considering using this new form of virtual overlay technolgy, says Joris Evers, who is communications manager for La Liga.

A small wish from the team of Footballogy.net; we cross our fingers that it will never be necessary. Both TV, spectators and clubs are now thirsty for a soon reunion with cheering fans in the hitherto corona-hit, empty stadiums. We look forward to the spotlight not only from the light poles, but also at the end of the tunnel, once again lighting up the football experience. Until then, we are delighted that creative people have put their heads down and came up with something that, at least for a while, can give a little life to the stands.

This is how your future football experience will be – maybe…